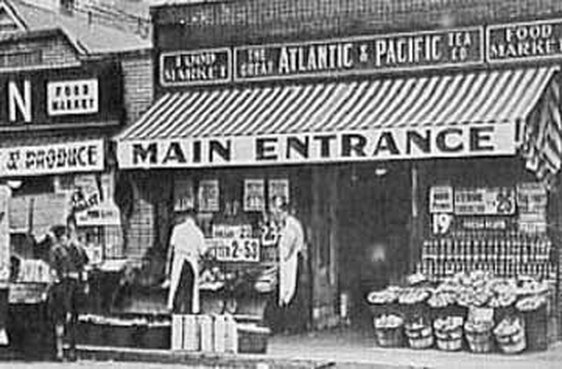 A typical grocery store from the 1920s.

Less Than a Stellar Beginning

In mid-October they robbed a movie theater in Crothersville of $18, of which Dalhover said he was given $4 after expenses were deducted. Later that week they robbed a grocery store in Sellersburg and made off with $190.

It was about this time that Shaffer joined them and they agreed to make robbery their profession, using Dalhover’s farm as their base. Dalhover told the FBI that they robbed stores and filling stations every Saturday night, and sometimes on Sunday. He also said Brady, Shaffer and Geiseking were committing other robberies on weeknights, but that he was wasn’t involved in them.

Between this time and April of 1936 they committed about 150 holdups and at least two murders. However, they broke no federal laws and so the gang didn’t show up on the FBI’s radar.
Shaffer, the youngest of the trio, was a drinker and a braggart and just before Christmas 1935, Brady and Dalhover dropped him and used Geiseking because they feared Shaffer was bringing unnecessary attention.

By January of 1936, however, Shaffer returned to the gang, and it continued its spree throughout Indiana and, on one occasion, traveled to Danville, Ill., where it held up two grocery stores on the same night. It was at this crime that police were able to get to the scene quickly and pursue the bandits. Sometime during the chase, Brady began firing a high-powered automatic rifle at the pursuing officers. The gang was clearly stepping up its game.

But as the heat on them intensified and the cold Mid-West winter set in, the gang backed off on their robberies and Brady organized a group of teens in Indianapolis who would steal cars for him and drive them to various garages. Dalhover and Brady would strip the cars and fence the parts.

The money came in but it lacked the excitement and so the trio decided to go back into the robbery game. But one thing was needed … bigger and more powerful guns.

Connections were made in Newport, Ky., for the purchase of a machine gun from a bartender who obtained it from an Ohio policeman. Additionally, the gang purchased other high-powered weapons from the policeman himself. (Sometime later the policeman was arrested and dismissed from the force for his part in the sale.)

By February, the gang was back in action. Shaffer had once more been replaced by Geiseking and the three hit two Springfield, Ohio, grocery stores in the same night. Total take: $600.

At about this time, they learned they were prime suspects in the killing of Anderson, Ind., police officer Frank Levy who was gunned down when he stopped to investigate a suspicious vehicle. Allegedly, one of the gang later admitted they had committed the crime, but Dalhover always denied it was them.