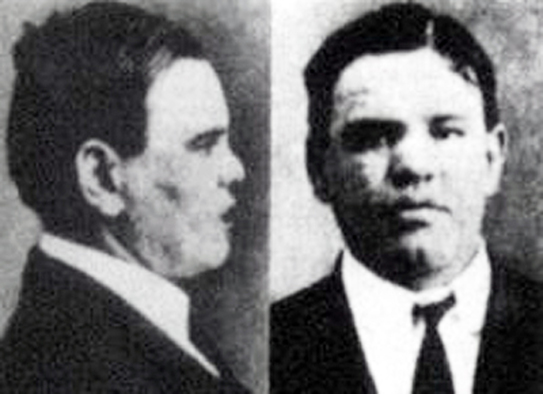 Monk Eastman in a mugshot from Sing Sing. 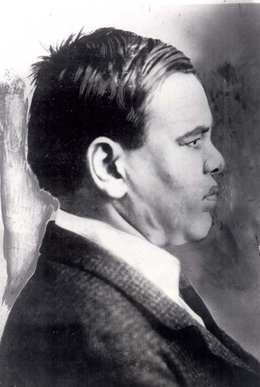 Eastman's mugshot, touched up.
"Monk" Eastman was a brawler who founded and led the Eastman Gang, one of the most powerful street gangs in New York City at the turn of the 20th-century. He's is considered to be one of the last of the 19th-century New York street gangsters who preceded the rise of Arnold Rothstein and more sophisticated organized criminal enterprises.

Eastman’s background remains a subject of debate. The most common story, however, popularized by Herbert Asbury in his book "The Gangs of New York," says Eastman was born Edward Osterman in Brooklyn in 1875 to an affluent Jewish restaurant owner. When he reached maturity, according to Asbury, his father set him up with a pet shop where he could indulge in his hobby of raising and selling birds. However, Eastman was seduced by the action and easy money of Manhattan’s underworld, which he later went on to control.

As popular as this story may be, no records exist to support it. What city records do exist reveal that Eastman was born Edward Eastman in 1875 in the rowdy Corlear’s Hook section of lower Manhattan to Samuel Eastman, a Civil War vet, and his wife, Mary Parks. By the time Eastman was five his father had run off and the family had been forced to relocate to the home of Mary Parks’ father, George Parks, on the upper east side.

According to the 1880 U.S. Census Eastman, at 5, was living on East 75th St., in Manhattan. He lived with his grandfather, age 68, who was working in a dry goods store. Also in residence were Edward’s mother, age 35, sisters Lizzie, 10, Ida, 8, and Francine, 3. Everyone is listed as being born in New York except Lizzie, who was born in California. Both George Parks and Mary Eastman are recorded as being divorced.

Going back 10 years to the 1870 census, Mary Eastman is listed as living on Cannon Street in the Lower East Side of Manhattan with Samuel Eastman, age 40, born in New York and working as a paper hanger. Living with them were Lizzie and Willie, 3, born in New York. It's believed Willie did not survive as he was not listed with the family in 1880. Going back yet another 10 years, to the 1860 census, Samuel Eastman is listed as living in Manhattan in the household of Thomas McSpedon and working as a paper hanger. No further census records on Edward Eastman are found, and his mother is listed in the 1900 census as living on Curtis Avenue in Queens with daughters Elizabeth and Francine and their families.

The fact that Monk Eastman’s first documented arrest didn’t occur until after his grandfather had died suggests that Parks may have succeeded in keeping him under control. At some point, Parks did set Eastman up with a pet shop on Broome Street, and even after he had become a notorious gangster, Eastman continued to list "bird seller" as his occupation.

Eastman’s considerable skill as a criminal, however, suggests he was involved in criminal activities from an early age. It’s likely that after he moved uptown, he regularly returned to the lower east side and become involved with the many gangs of the area.

Eastman officially entered the police records in 1898 under the alias William Murray (one of the many Irish names he employed).

He spent three months on Blackwell’s Island for larceny, and during that time he belonged to a gang of pimps and thieves known as the Allen Street Cadets.

Asbury reports Eastman distinguished himself as a colorful character in those early days by keeping a messy head of hair, wearing a derby two sizes two small, sporting numerous gold-capped teeth and often parading around shirtless or in torn clothing, but always accompanied by his pigeons.

In time, Eastman’s reputation as a tough guy (despite his small five-foot-six inch frame) earned him the job of "sheriff," or bouncer, at the New Irving Hall, a celebrated club on Broome Street, not far from his pet shop.

According to urban legend, Eastman patrolled the New Irving with a four-foot "locust," or police day-stick, in hand, on which he carved a notch for every head bashed. On the night he reached 49 notches, Eastman reportedly whacked an innocent bystander so as to make it an even 50. It was in places like the New Irving Hall and Silver Dollar Smith’s Saloon (another Eastman hang-out) that he first became involved with the Tammany Hall politicians that would eventually put him and his gang to work as repeat voters and strong-arm men.

Eastman’s greatest rival was Paul Kelly, leader of the Five Points Gang. The warfare between these two gangs allegedly peaked on Sept. 17, 1903, with a gun battle on Rivington Street involving dozens of men. Two men were killed and numerous innocent bystanders were injured.

Eastman’s address is listed as 221 E. 5th Street at the turn of the century, just about two blocks from Paul Kelly’s New Brighton Social Club at 57 Great Jones St. 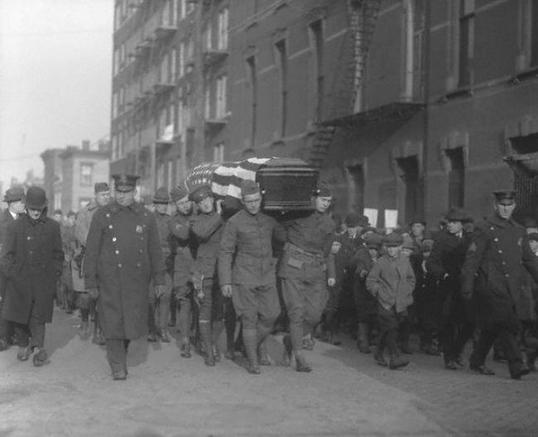 On Feb. 3, 1904, Eastman attempted to rob a man on 42nd Street and Broadway in Manhattan. However, the young man was being followed by two Pinkerton agents hired by the man’s family to keep him out of trouble. The agents intervened and Eastman started shooting at the agents while running away. The chased ended when Eastman was apprehended by policemen responding to the shooting. Tired of bad publicity from Eastman, Tammany Hall refused to help him, and later that year Eastman was convicted and sentenced to 10 years in Sing Sing penitentiary.

In 1909, Eastman was released after serving five years. During his absence, the Eastman Gang had shattered into several factions; one of his top men, Max "Kid Twist" Zwerbach, was dead. Since none of the surviving factions wanted Eastman as their leader, he was effectively out of power. For several years, Eastman reverted to petty thievery. During this period, he became addicted to opium and served several short jail terms.

After the United States entered World War I, the 44-year old Eastman decided to join the Army. During his military physical, the doctor observed all the knife and bullet scars on Eastman’s body and asked him which wars he had been in; Eastman replied, "Oh! A lot of little wars around New York." Eastman ended up serving in France with "O’Ryan’s Roughnecks," the 106th Infantry Regiment of the 27th Infantry Division. After Eastman’s discharge in 1919, the Governor of New York, Al Smith, recognized Eastman’s honorable service by restoring his U.S. citizenship, which had been stripped from him because of his criminal past.

After the Army, Eastman quickly returned to a life of petty crime. One of his criminal partners was Jerry Bohan, a corrupt Prohibition agent. On the morning of Dec. 26, 1920, a group of men, including Eastman and Bohan, met at the Bluebird Cafe in Lower Manhattan. About 4 a.m., there was a group conflict over a monetary issue, with Eastman and Bohan opposing one another. When Bohan left, Eastman followed him and accused him of being a thief. Bohan drew his pistol and killed Eastman.

Bohan was later convicted of Eastman’s murder and served three years in prison. Eastman was buried with full military honors in Cypress Hills Cemetery in Brooklyn.

Although universally referred to as a Jewish gangster (even by papers of his own time), there is little evidence supporting his religion beyond the fact he worked closely with many Jewish criminals and was circumcised. In fact, the evidence against his being Jewish is stronger. In his book "The Jews of Sing Sing," author Ron Arons notes none of Eastman’s sisters (or even his own parents) were married in Jewish ceremonies, and that his maternal grandfather died in a Baptist rest home. Also, his paternal grandfather was born in America during a time when there were very few Jews in the country. Eastman’s brother-in-law even told the medical examiner after Monk’s death that the gangster was "not a Hebrew." However, in the climate of antisemitism that existed in late 19th century America, it’s possible Eastman’s family simply hid or even renounced their Jewish heritage. 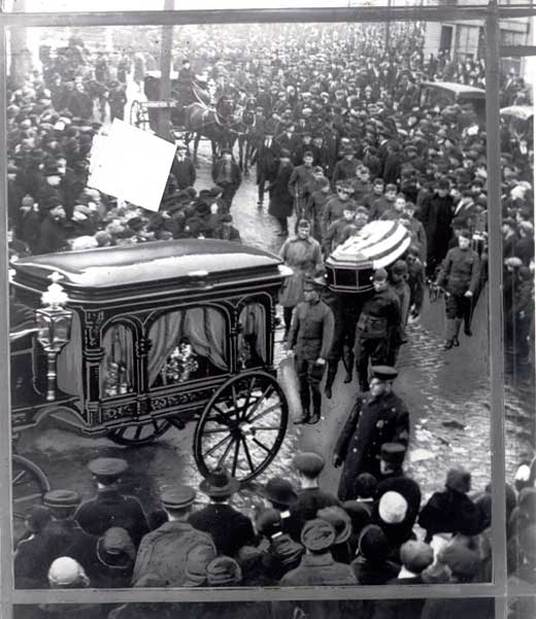