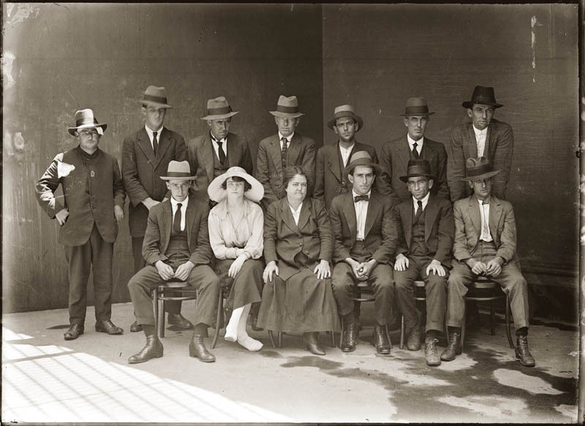 Generic police photo of assorted criminals from the 1920s.

As you read through this site, you'll come across dozens of names, many of which you'll recognize, others you won't. You'll also notice the same names cropping up in different stories.

In an effort to help you keep track of everyone, we list here some of the major gangs and who was associated with what gang ... and for what each gang was most noted.

The lists are by no means complete and not 100 percent accurate because, well lets face it, law enforcement sometimes "filled in the blanks" when writing reports, and the criminals weren't always truthful when discussing what gangs they worked with over the years.
Also, we intentionally left off names of players who were only present in minor roles for just one or two crimes, or actually served more as gofers than "gang members." To list them would be unruly and unnecessary. Finally, many of the people listed here were associated with more than one gang, but are only listed with the gangs they are most associated with.

It  wasn't all peaches and cream

And while on the subject of gangs, a brief word on gang dynamics.

Contrary to what many believe, the gang members rarely bonded as BFF. Just as you, the reader, likely work with some people you are fond of and others not so much, so too did the gangs.

In reality, a gang’s only real bond was the common goal of committing a crime. Members usually trusted other members to do assigned tasks during a crime, but that trust rarely extended much beyond that level. While it’s true if a gang member was shot during a robbery, other members might help the wounded one into the getaway car, that action was likely as much for self-preservation as friendship and loyalty. There was always the chance a captured gang member might talk once in custody.

Another myth is that gangs always stayed together and when not committing a crime, spent happy hours in a hideout playing cards, target shooting, sleeping and generally enjoying each other’s company.

For the most part, once a crime was committed the gang would go to a safe place, divide up the spoils and then go their separate ways until the next crime. Certainly, some gangs did stay together … Pierpont, Dillinger, Makley and Clark "vacationed" in Florida and Arizona; Floyd and Richetti generally stayed together; Karpis and Freddie Barker, if not physically together, were in contact almost on a daily basis. Certainly Bonnie and Clyde were inseparable. But these were the exceptions rather than the rule.

Besides, staying together made a gang an easier target for law enforcement. When members split up after a crime it confused law enforcement and stretched its already limited resources, thus improving a gang’s chance of staying free.

But staying free had a heavy price. As a gang’s notoriety grew, so did its cost of living.

In the beginning, members had pockets full of cash and they stayed in the best hotels, drove the best cars, dressed in the best clothes and pretty much moved about as they wanted. But as they became known and climbed higher on the “most wanted” lists, they could not live as openly and had to depend on underworld connections to find safe houses … and the “hotter” the member, the higher the price for shelter … financially, emotionally and physically.

Examples of this are common: Bonnie and Clyde spent their final months alternating between living in their car and in an abandoned farmhouse without doors, windows, running water and missing much of its roof. “Baby Face” Nelson, along with his wife, spent most of the summer and fall before his death sleeping in the car, rundown second-rate tourist camps or outside in the desert around Reno, Nev. Floyd spent much of his final year living in a tiny apartment in a poor neighborhood of Buffalo, N.Y., a virtual recluse. He spent his final two nights sleeping in rain-soaked woods with nothing but the clothing on his back. Dillinger spent his final days in a rented room in a B-list Chicago brothel.

Additionally, they had to worry about “trusted” associates turning them in for reward money or to curry favor with police - or wanting them dead for personal reasons.

Bonnie and Clyde were betrayed by a gang member looking to have charges against him dropped; Verne Miller was killed by the syndicate because it felt his participation in the Kansas City Massacre was drawing too much attention to its operations; Nelson, who had a $5,000 price tag on his head from police, had another one placed there by the syndicate because he angered the wrong people; Homer Van Meter was set up by his underworld connections for a number of reasons, but mostly because they wanted to keep the money he left with them for safekeeping; Dillinger was turned in by the madam who owned the brothel where he was staying in an effort to fight pending deportation to her native Romania. And the list goes on.

And what of the women in the gang members’ lives?

Many times they did not get along and that added to gang tensions already running high because of police pressure. If gang members had an argument, which was common, the women would often come to the defense of their husband/boyfriend and that would set off another argument among the women. And although not common, it wasn’t unheard of for a gang member who might be between girlfriends to start flirting with another member’s woman. Guns could be drawn over such incidents.