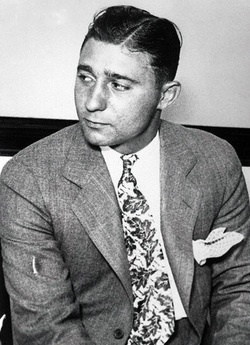 McGurn in court.
From Capone’s boy to mob leper

Unlike many gangsters of his era, Jack McGurn was not a product of the streets. He came from a good family and was given many opportunities as a youth to succeed. While others turned to crime, McGurn turned to sports and because a professional boxer with hopes of one day being champion.

All that changed, however, when his family crossed paths with the feared Black Hand.

Born Vincenzo Antonio Gebardi in Licata, Sicily, in 1905, he was the eldest son of Angelo and Giuseppa Gibaldi (Verderame). A year later the family emigrated to the U.S., arriving at Ellis Island en route to Chicago on Nov. 24, 1906.

McGurn grew up in the Chicago slums and as a teen, took up a career in boxing. He used the name "Battling" Jack McGurn because Irish boxers got the better bookings.

As a youth, McGurn stayed away from street gangs and focused on his boxing. However, when his beloved step-father was killed by extortionists on Jan. 28, 1923, he avenged the death by tracking down and killing the three men responsible. Because the killers had publicly belittled his father as a "nickel and dimer," McGurn placed a nickel in each victim’s hand. Leaving a coin in his victims’ hands would later became his trademark.

His tracking down and killing of the three men came to Al Capone’s attention, who admired McGurn’s determination, and soon had McGurn on his payroll as an enforcer.

As his fortunes grew, McGurn purchased part ownership of a speakeasy, the infamous Green Mill at 4802 North Broadway. The club, still in operation today, was located in the middle of Capone gang rival George "Bugs" Moran’s territory.

Just how violent McGurn could be was made evident in November 1927, when a club manager, Danny Cohen, gave McGurn money to "persuade" comedian/singer Joe E. Lewis, one of Chicago’s top performers, not to move his act south to the rival New Rendezvous Cafe, situated at North Clark Street and West Diversey Parkway.

When Lewis refused, McGurn simply slit Lewis’ throat and cut off a portion of his tongue. Left for dead, Lewis miraculously recovered and eventually resumed his career, but his voice never regained its lush sound. 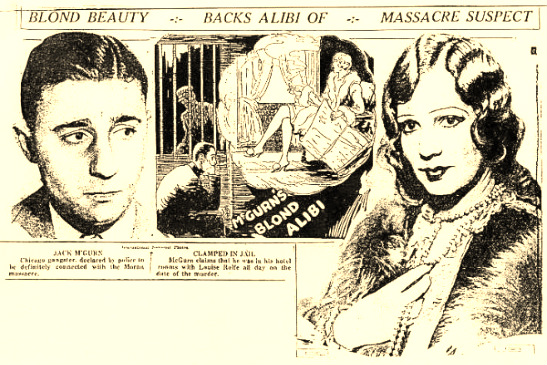 Popular newspaper graphic of the time in which the press played up the love angle. She told police McGurn was with her all day Feb. 14. 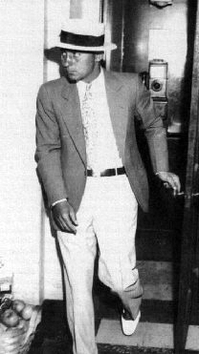 News cameras catch McGurn.
McGurn is most associated with planning the 1929 St. Valentine’s Day Massacre, but any part he may have played in the incident has never been proven. Although police charged McGurn in the case, he was never brought to trial, largely due to his "blonde alibi" — girlfriend and later wife Louise Rolfe — who claimed they spent the whole day together in bed at the Stevens Hotel. They had been registered under the name J. Vincent D'Oro in room 1919 A. (Newspapers found littered on the floor of their suite were all opened to the massacre story). Despite her statement, police nonetheless charged McGurn with seven counts of murder related to the massacre. He was also charged with crossing state lines with Rolfe, an unmarried woman which in those days was considered to be a type of white slavery. McGurn beat both the slavery and massacre charges by marrying Rolfe, thus avoiding her testifying against him in court.
Although McGurn was married, he quickly divorced his wife, Helen, just days before he married Rolfe. This was also Rolfe's second marriage. She had been married to a man named Harold Bokes, and they had a daughter named Berneda (who died of cancer in the 1980s).

In April 1930, when Frank J. Loesch, chairman of the Chicago Crime Commission compiled his "Public Enemies" list of the top 28 people he saw as corrupting Chicago, McGurn’s name was fourth on the list.

The list was published nationwide, and the notoriety caused him to be shunned by Capone's mob, known as the Outfit, as wwell as other gangs.

With no place else to turn, McGurn, an experienced golfer, attempted a career as a professional golfer. According to the July, 1996, and June, 2003, issues of "Chicagoland Golf" magazine, McGurn was a silent partner in Evergreen Golf Course, at 91st Street and Western Avenue, a known mob hangout where McGurn could often be found playing, practicing and giving lessons, or drinking and playing cards in the clubhouse.

On Aug. 25, 1933, the Western Open golf championship began at Olympia Fields Country Club in the far south suburb of Olympia Fields. McGurn entered the competition as Vincent Gebhardi (a version of his real name). In the opening round, McGurn carded a 13-over-par 83 on course No. 4 (today’s North Course). The next morning, the name "Gebhardi" on the day’s pairing sheet was observed by an alert Chicago police detective, who sent two sergeants to arrest him.

"Aware of McGurn’s truculent temper," the Chicago Tribune account of the arrest reported, "the sergeants enlisted the help of Lt. Frank McGillen and five policemen from the Homewood station of the county highway force."

The group of officers accosted McGurn on the seventh green and told him he was under arrest on a warrant issued the day before under the "criminal reputation law." McGurn’s wife, according to news reports, who was nearby and approached the policemen and snapped, "Whose brilliant idea was this?"

McGurn, who was aparently playing well, politely asked to finish his round. Amused, the plainclothesmen agreed and became part of his gallery. But the police presence began to unnerve McGurn and his game went sour. He came in with a 16-over-par 86 for a 36-hole total of 169, 14 strokes above making the cut. 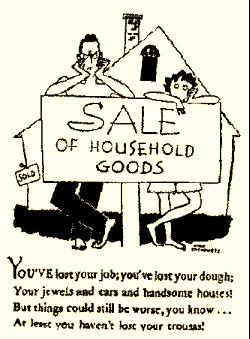 The card left by the killers.
Death in a hail of bullets
Less than three years later, on Feb. 15, 1936, McGurn, by then impoverished and abandoned by his fellow gangsters, was assassinated by three men using machine guns. The shooting took place while McGurn was bowling at the second-floor Avenue Recreation Bowling Alley, at 805 N. Milwaukee Avenue (at Chicago Avenue). He was buried in Mount Carmel Cemetery in Hillside, Ill., the same cemetery that contains Dion O’Bannion, Earl "Hymie" Weiss, Frank Nitti, Al Capone and several other gangsters from various eras.

Although the identity of McGurn’s killers remains unknown, research and speculation by criminologists suggest two possible theories for the killing: revenge by George "Bugs" Moran for McGurn’s alleged part in the St. Valentine’s Day Massacre, or: the South Side mob, under Frank Nitti who took over after Capone was sent to prison, because McGurn (a heavy drinker and a braggart) had become a liability because of his intimate knowledge of the gang's extensive operations.

As a final insult, the killers pressed a nickel into the palm of his left hand, and put a Valentine card with this poem in his right hand: "You’ve lost your job, you’ve lost your dough, Your jewels and cars and handsome houses, But things could still be worse you know … At least you haven’t lost your trousers!"

On March 2, 1936, McGurn’s half-brother, Anthony Demory, was killed in a manner similar to McGurn. Demory, who had claimed, "I know the guys who killed Jack. I’m going to get them." was shot by three masked men in a Chicago pool hall. Police linked the assassination to McGurn’s slaying. 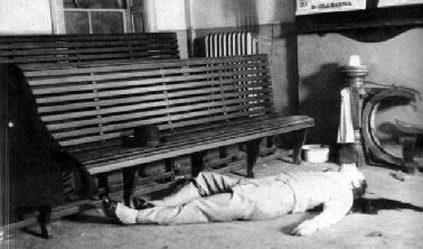 McGurn's body on the floor of the bowling alley.