"It's like the doctor said: 'Crime don't pay!"
Overheard at the Cook County Morgue
in Chicago where John Dillinger had been taken

"He was a good all-around ballplayer. He was a good batter, good fielder, and fast - he could steal anything, so they said."
- Emmett Hancock, speaking about
his brother-in-law, Dillinger

"Maybe I'll learn someday, Dad, that you can't win in this game."
- Letter from John Dillinger to his father

"He said he expected they would be here after him, but ... said he didn't know if they would or not for sure."
- Art Miller, cellmate of Dillinger, just
before Dillinger was broken out
of the Lima, Ohio, jail

"Johnnie's just an ordinary fellow. Of course he goes out and holds up banks and things, but he's really just like any other fellow,
aside from that."
- Mary Kinder, Dillinger's girlfriend

"They looked like bank examiners when they started working, if it hadn't been for all
the guns  they were carrying."
- Jane Williams, a bank employee, speaking to the press after one of the gang's holdups

"There wasn't a heavy drinker in the crowd ... They was all nice, clean boys."
- Mary Kinder, a Dillinger girlfriend

"You may as well have this. My luck
is running out anyway."
- Dillinger, giving a rabbit's foot to a newsman
just months before his death

"A jail is just like a nut with a worm in it.
The worm  can always get out."
- Dillinger, in an interview with newspapers,
after his Arizona arrest 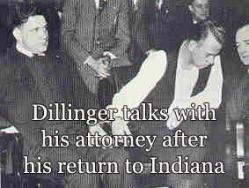 "From what I hear, I'm surprised Dillinger didn't serve tea to the guards before he went away."
- Prosecutor Robert Estill, speaking after Dillinger's escape from Crown Point, Ind.

"I made him coconut cream pie, fried chicken and everything that goes with it."
- Mrs. Audrey Hancock, Dillinger's sister, speaking on her brother's visit to the family farm after his escape from Crown Point

"So far as the gun used in the escape is concerned, the grand jury believes that,
from all the evidence, was a wooden one."
- Grand jury report on Dillinger's escape
from Crown Point

"It was the worst thing that ever happened to me since I had a brand new pair of boots burned off in a forest fire."
- Constable Carl Christensen on the gang's escape from Little Bohemia Lodge in Wisconsin

"Even some red Indians joined the hunt today, with
bow and arrows."
- London newspaper on the hunt for Dillinger
Home         Next