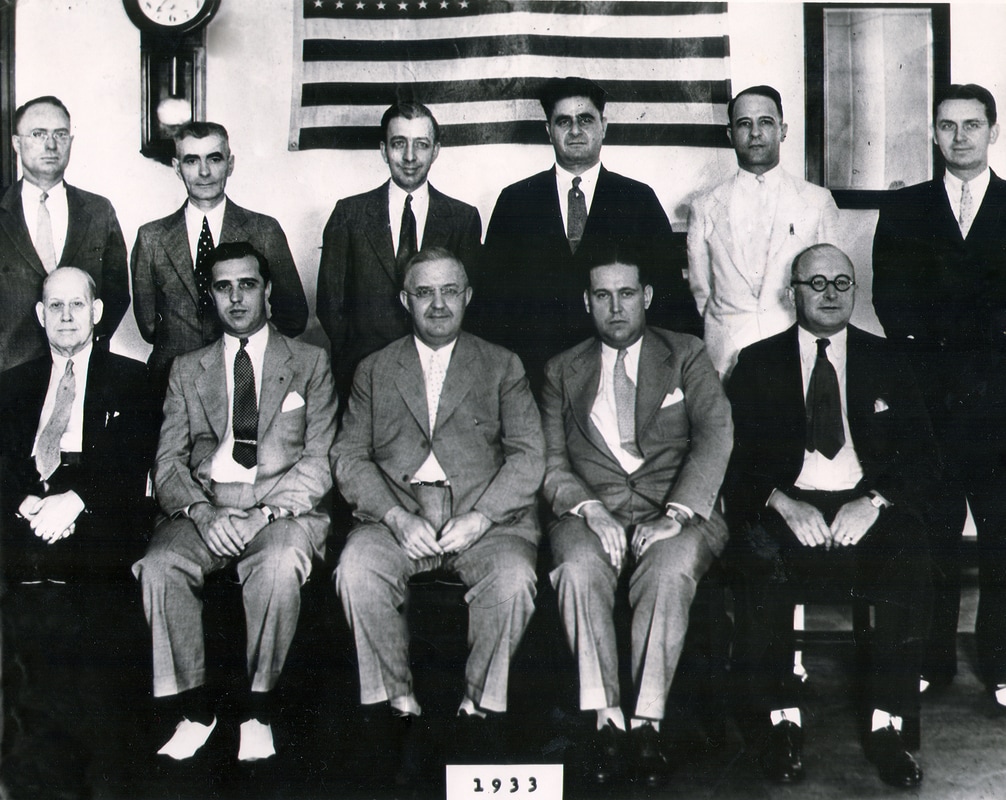 The "Untouchables" as they came to be known were a special squad tasked specifically with bringing down Al Capone and his network. That group was disbanded upon Capone's conviction in 1931. Mr. Ness then became Chief Investigator of the Chicago Prohibition Bureau which was disbanded with the repeal of Prohibition in 1933. This photo is a group photo of the investigators assigned to that bureau. They sat for the portrait as their bureau was being disbanded. Seated from left are: Jim Berenton, Al Aman, Gus Simons, Ray Casserly, Walter Miller. In the rear from left are: Tom Scott, Lee Donahue, Bob Ford, Ivan Caushift, Unknown, Eliot Ness, Agent Aman went on to a long career with federal law enforcement later becoming involved with the so-called "Murder, Incorporated" investigation and convictions, and many high-visibility takedowns of narcotic traffickers. He was a reserve naval officer and was activated during World War II, serving in the Pacific Theater. He died of a heart attack at his home in the Ravenswood neighborhood of Chicago in 1963. (Photo, names and background history courtesy of the Aman Family)

The initial nine were:

Barney Cloonan:  A muscular Irishman, known for his strength.

Joe Leeson: Expert driver with a speciality for tailing suspects.

Paul W. Robsky: Short and unobtrusive wire-tapping expert. (He was the last of the Untouchables to die and authored a book "The Last of the Untouchables." Robsky was never a fan of the TV series. He often said, unlike the TV series, there was never any shooting, no one died, and "We were never in any real danger during the raids or our investigations. It was mostly routine work.")

Frank Basile: A former convict whom Ness had reformed, Basile was killed during an attempt on Ness' life. He was Ness' friend, sometime assistant, and driver. Basile was often present at the brewery raids, even though he was not an agent.