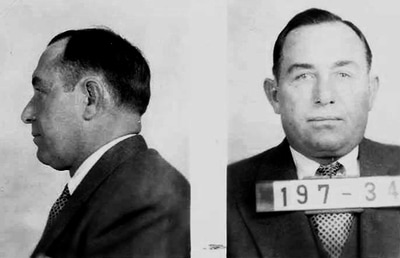 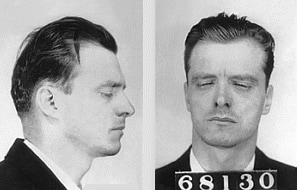 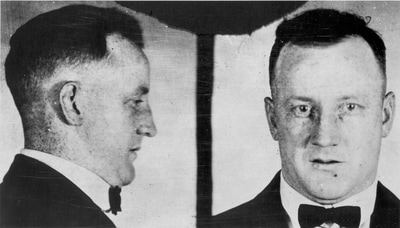 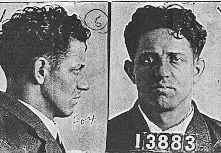 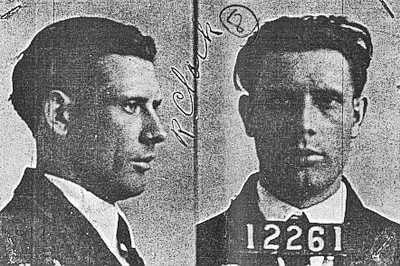 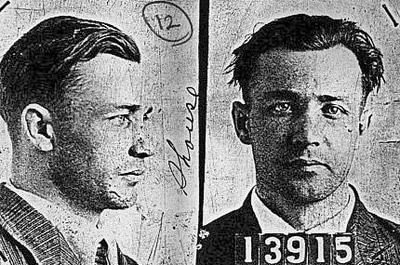 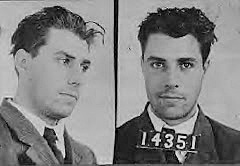 They just walked out the front door

John Dillinger had been paroled in May of 1933 and he immediately began his crime spree, but the real “Dillinger Era” didn’t begin until the fall of that year when 10 of his friends from the Indiana State Prison escaped.

The plan to escape had been put into motion a year earlier by Harry Pierpont, a seasoned bank robber. Pierpont, along with several other bank robbers including Russell Clark, Charles Makley and John Hamilton, had devised several escape plans over the years, but they knew the key to a successful escape would be guns … and that would fall to Dillinger.

Because Dillinger was about to be paroled, Pierpont and the others schooled him in how to rob a bank, and earmarked specific banks he should hit. They also gave him the names of trusted contacts on the outside. It was Dillinger’s job to raise money for possible bribery of various people and to secure money, weapons and a hiding place for the escapees. But first he had to get them out, and that meant getting guns in.

His first attempt failed. He had tossed several handguns over the 30-foot wall but the following morning a convict not in on the plot discovered them and turned them over to Deputy Warden H. D. Claudy.

His second try was successful. No one will ever know for certain how he got the guns in, but the popular theory is he hid them in a large crate of thread being shipped from the Henry Myer Manufacturing Company of Chicago to the Gordon East Coast Shirt Factory within the prison.

Supposedly, the crate was marked with an “X” in red crayon and Walter Dietrich, one of the escapees who worked in the shirt factory, hid the three .45s and ammo in a small carton of buttons.

The break had originally been set for Thursday, Sept. 28, but was moved up to Tuesday, Sept. 26, when they learned jailhouse snitches told guards about a possible escape being planned.

Best route is a direct route 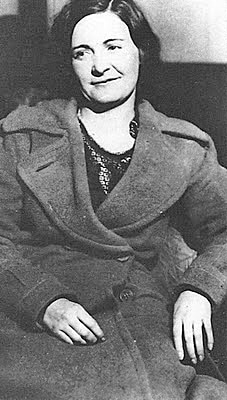 Mary Kinder
Just after 1 p.m. on the 26th, as lunch was ending and inmates were returning to work assignments, nine of them slipped into the basement shirt factory where Dietrich handed Makley, Pierpont and Hamilton the .45s. The rest were given fake weapons. The group immediately took factory superintendent G. H. Stevens, and 300-pound Day Captain Albert Evans (whom inmates referred to as “Big Bertha,”) as hostages. In addition, they tied up factory foreman Dudley Triplett and five convicts who had come into the basement for supplies.

Picking up stacks of shirts to cover their weapons, as well as an improvised battering ram, the group marched in regulation prison quick step out of the basement and into a rainy open prison yard toward the door of Guard's Hall.  Above them, armed guards along the walls looked down but believed it’s just another routine shirt delivery for sale to the public.

At the door to Guard’s Hall, one of the inmates pointed a .45 at the face of guard Frank Swanson and told him not to get stupid and to just open the heavy metal gate.

As they were filing in, another guard, Guy Burklow, used to seeing shirt deliveries, simply unlocked a second door and allowed the 10 inmates and their hostages to enter. A third guard, Fred Wellnitz, who might have become suspicious, was quickly struck over the head with a blackjack by Shouse. The escapees took Wellnitz’ keys from his belt and opened the final locked door. The makeshift battering ram was later found inside the door. It took less than six minutes for the escapees to get from the yard through three locked doors and into an unsecured area.

Now inside the Administration Building, Warden Louis Kunkel and members of his staff were quickly taken prisoner and locked in a vault ... and a few injuries are sustained.

Superintendent of Prison Industries Lawrence Mutch was beaten when he refused to open a storeroom containing machine guns and rifles …. Day Captain Evans was struck several times when he protested the beating of Wellnitz …. Finley Carson, 72, a clerk, was shot in the stomach when he allegedly moved too slowly. (He would survive the wound and return to work.)

With all hostages locked in the vault, the 10 escapees walk out the unlocked front door. About 20 minutes had passed since they left the prison basement.

Outside, they quickly broke into two groups.  One group, composed of Dietrich, Burns, Fox, and “Oklahoma Jack” Clark encountered Sheriff Charles Neel of Harrison County in the parking lot. He had just dropped off a prisoner. They forced him into his car and they turned onto the Dunes Highway towards Chicago.

The other group - Pierpont, Makley, Hamilton, Russell Clark, Shouse, and Jenkins - run across the street to a Standard Oil gas station where they attempt to take a car belonging to station manager Joseph J. Pawelski. Instead of giving up his keys, however, Pawelski runs off.

They quickly grabbed a car driven by Herbert Van Valkenberg of Oswego. Forcing Van Valkenberg, his wife, and their friend Mrs. Minnie Schultz, 81, from the vehicle, they disappear along the rain-slick roads.

Managing to evade roadblocks, the gang late that night arrived at the Indianapolis apartment of Pierpont’s longtime girlfriend Mary Kinder who had been expecting them. 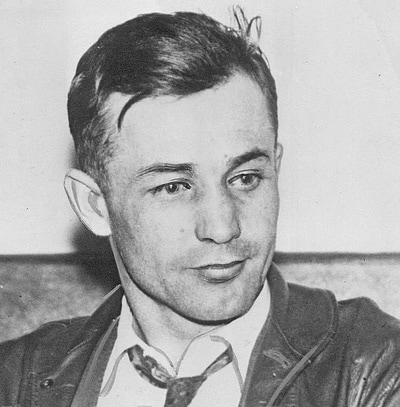 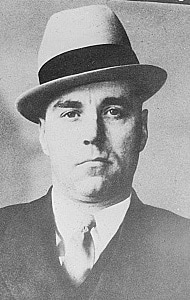 Shouse, left, and Burns at about the time of their arrests.

Everyone had a plan

Meanwhile, the Dietrich group didn’t fare as well. Shortly after taking Sheriff Neel hostage, they failed a corner and ran the car into a ditch.

They managed to steal another car from a nearby farmhouse owned by Carl Spanier, but the car blew a tire a few miles down the road and the escapees, still in their blue prison clothing, were forced to spend a rainy night in thick underbrush.

By morning, they realized they were hopelessly lost and spent all of Wednesday and Thursday wandering in circles through the back country.

By Thursday afternoon, the group was wet, tired, confused and unraveling. Dietrich, Burns and Fox, seeing Neel as a burden, wanted to leave him tied to a tree. Clark, suffering from stomach ulcers irritated by eating wet, raw vegetables since the break, argued weather conditions would likely kill him before he was found and that would clearly add to their growing problems.

Finally, Clark took control of Neel and eventually made his way to Gary, Ind., where he released him. Neel, of course, immediately alerted police that Clark was in the area. Within hours, he was arrested in the nearby town of Hammond and returned to Michigan City. He had been free for less than 72 hours.

The rest of his group did a little better.

Dietrich soon joined the Jack Klutas Gang, known as the College Kidnappers because its leader, Theodore “Handsome Jack” Klutas was an alumnus of the University of Illinois. The 10-member gang was involved in a variety of crimes and was connected to Capone’s mob, but specialized in kidnapping wealthy mobsters for ransom. These mobsters were targets because they were less likely to approach the police and could pay the ransom. Dietrich was finally recaptured on Jan. 6, 1934, when police walked in on him as he was shaving.

All three were returned to Michigan City to serve out their sentences.

With one exception, Jenkins, the Pierpont group will become what is now referred to as the first John Dillinger Gang. In reality, it was Pierpont who led the gang. No matter, the press of the time labeled them The Terror Gang.

Back in Indianapolis, Kinder is pleased to see Pierpont, but distressed to learn her brother, Earl Northern, is not with them. He was included in the breakout plan, but he contracted tuberculosis and was confined in the prison hospital when the break took place. She told them of Dillinger’s arrest three days earlier and Pierpont immediately began plans to free him.

The next day, a friend of Kinder went out and purchased six mens’ suits from six different stores, as well as socks, shoes and other accessories from other stores. Later that day, Harry Copeland arrived with money and guns from Dillinger and told the gang he had secured a rented house for them in Hamilton, Ohio, just north of Cincinnati. (The same town where James Clark had been arrested.)

The gang left for Hamilton that afternoon in a stolen car. Just outside of Indianapolis, however, they were spotted and police gave chase. During the chase, Jenkins somehow fell out of the car.

He managed to escape on foot, eventually flagging down and conning motorist Victor Lyle, 24, into giving him a ride. Lyle later told police when he attempted to drop off Jenkins, the escapee drew a gun and forced him to continue driving. By 3 a.m. the next morning, almost out of gas, Lyle pulled into a gas station. When Jenkins went to wake the owner, Lyle drove off and alerted police.

Police and vigilantes immediately began searching the area. Jenkins managed to stay ahead of them until that evening when he is cornered at a store in Bean Blossom, an unincorporated town near Indianapolis. When he attempted to shoot his way out, farmer Ben Kanter fired a round of .20 gauge shot at Jenkins, removing a major portion of the escapee's skull.

Meanwhile, the night before, the other five managed to make it to Hamilton. Already short on funds, they went right to work. On Tuesday, Oct. 3, just a week after their escape, they hit the First National Bank in Makley’s hometown of St. Mary’s, Ohio, for $11,000. Seasoned professionals, everything went smoothly and there was no gunplay. The gang was back in Hamilton in time for dinner and they began planning others jobs … and Dillinger’s rescue.