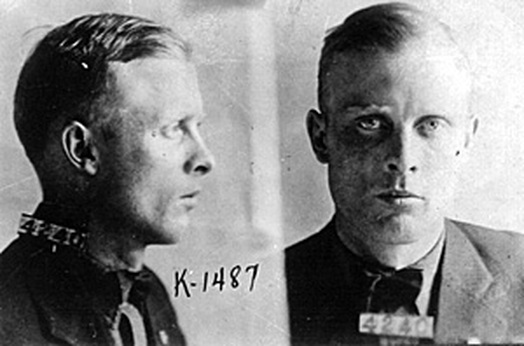 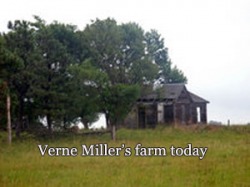 Of all the outlaws that roamed the Midwest during the Golden Age of Bank Robbery, none were more complex than sandy-haired, blue-eyed Verne Miller. Everything about him - even his age and birthplace - was cloaked in mystery. In less than 15 years, Miller transformed himself from war hero and decorated law enforcement officer, to "the most dangerous criminal in the country," and the subject of a nationwide manhunt.

Depending on which "official" form he was filling out, his birthdate was listed as 1892, 1895 or 1896; his birthplace listed as South Dakota, Iowa or Illinois. (It was Iowa.)

What is know for certain, however, is that Miller’s parents divorced when he was very young, and he was on his own before he was a teen.

Records show he surfaced in Huron, S.D., in 1914 where he took work as an auto mechanic. In 1916, he joined the U.S. Army and saw service along the Mexican border. By 1917 he was back in Huron, where he married and resumed work as a mechanic. A month after his marriage, however, he was shipped off to France where he saw extensive World War I action.
Field-promoted to sergeant, Miller was decorated as a marksman and sniper. He also was awarded the French Croix de Guerre award for bravery on the battle field.

After the war, he returned to Huron where he joined the police department, and was later elected sheriff in Beadle County. As always, he quickly earned the respect of residents as a fair, intelligent and friendly sheriff. Then it started to unravel .... 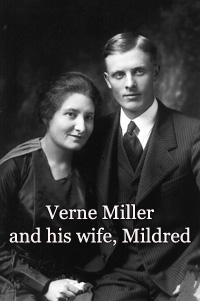 His wife, Mildred, fell ill and was taken to Rochester, Minn., for hospitalization and treatment. Miller was granted a leave of absence so he could stay with his wife in Rochester.

Within weeks of his leaving, county officials discovered $6,000 missing from county funds ... and they wanted to talk to Miller about the missing money. They contacted the hospital and learned Mildred had been released shortly after her arrival. She had not heard from her husband.

Three months later, acting on a tip from a St. Paul, Minn., hotel clerk, Miller was arrested. He pleaded guilty to embezzling $2,600, and was sentenced to the South Dakota penitentiary to a term of two to 10 years. While there, he landed a cushy position as the warden's chauffeur and spent considerable time outside the walls.

He served two years and was paroled in 1924, and worked quietly as a farmhand. At first, it seemed he had learned his lesson and was attempting to lead a productive life. It wasn’t long, however, before he was indicted for bootlegging - a common crime during Prohibition. He posted bond, and simply left the area.

Life as an outlaw and wanted man 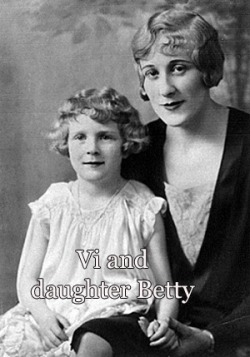 Shortly after skipping bail, Miller met Vivian Gibson, an attractive farm girl from Leola, S.D., who willingly joined him in his rapidly growing bootlegging business. The pair worked hard, and from 1926 to 1929, they were the leading bootleggers in the Twin Cities, and were also known for their high-quality (and fair) casino operations in Montreal, Canada.

They were making a good living, but Miller wanted more, and in 1930 he moved to bank robbing.
Joining forces with such veteran robbers as Harvey Bailey, Tommy Holden, Jimmy Keating, Frank "Jelly" Nash, and George "Machine Gun" Kelly, Miller robbed banks throughout the Midwest and Southwest.

It was his association with Alvin Karpis and the Barkers, however, that set the wheels in motion that would, within months, make him the most wanted man in America, and led to his bloody death along a remote roadside ditch.

Friday, Dec. 16, 1932, was a bitterly cold morning in Minneapolis, Minn. An ice storm had hit the night before, and a major snow storm was predicted for the weekend. Shortly before 11 a.m., a dark-colored touring car pulled up to the 3rd Northwestern Bank of Minneapolis. Behind the wheel was Jess Doyle, who remained in the car with the motor running. As Doyle pulled up to the bank entrance - the bank was a large, glass-fronted building at a major intersection and had a streetcar stop just outside it’s front door - several men approached the building on foot from different directions.

The men were later identified as Alvin Karpis, brothers Freddie and Doc Barker, Larry Devol, Bill Weaver and Miller. The men entered the bank and the robbery began. It was "business as usual" for the robbers .... then all hell broke loose. 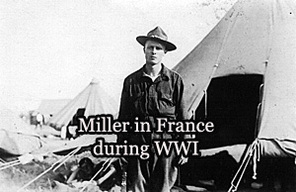 Several female employees weren’t cooperating with the robbers’ orders, so Freddie Barker slapped one of them. She screamed, and that started several others screaming. Just then, the bank guard fell to the floor and hit an alarm. More people started to panic, and more women started to scream. Outside a streetcar had pulled up. The motorman, seeing the robbery in progress through the large windows, fell to the floor covering his head. Passengers simply sit and gawked at the robbery unfolding inside the bank. With the big windows framing the action, it was like watching a Saturday matinee.

Devol, holding a machine gun, started shouting at the clerks and customers to be quiet. Approaching sirens could be heard.

As the robbers continued scooping money into bags, Devol ran outside just as a police car came into view. Devol began firing, and so did Doyle, still sitting behind the wheel of the big Lincoln.

Devol started to run across the sidewalk to get a better shot at the approaching police car, but slipped on the icy sidewalk. His finger, however, never left the trigger. A hail of bullets swept across the sidewalk and through the getaway car (just missing Doyle). As Devol laid spread-eagled on the pavement, he continued to fire into the air above him.

By now, the others robbers had exited the bank and were running toward the Lincoln. It was then they noticed Devol, now back on his feet and again firing toward the police car, had apparently shot out the right front tire of their getaway car when he slipped and fell. The gang piled into the car anyway, and Miller, an expert driver, took Doyle’s place behind the wheel.

The gang managed to get away and into neighboring St. Paul where a second car was hidden. When they reached the second car they realized the shot-out tire had been completely stripped from the Lincoln and that Miller had been driving on the metal rim over icy roads at more than 60 miles an hour.

Total take from the robbery was about $22,000. Afternoon papers ran pictures of the two dead policemen still sitting in their bullet-ridden patrol car.
Later that night, as arranged, the gang split up. Weaver, the Barkers and Doyle headed for Reno. Miller and Karpis went separately to Chicago and Devol headed to Oklahoma. Miller eventually made his way Kansas City where he planned to stay until the heat from the robbery cooled down.

He was still there in June when he received a phone call telling him his friend and former partner, Frank "Jelly" Nash, who had earlier been arrested and sentenced, was being transported to prison via Union Station in Kansas City. There was an escape plot planned, and Miller was asked to help. The result would leave five people dead, including Nash, and become known as the Kansas City Massacre. (A detailed account may be found on another page on this site.)

U.S. Attorney General Homer S. Cummings declared the massacre "A challenge to the government. The army of crime has declared war on the United States." Within two weeks, Miller was named as one of the three shooters in the massacre. ("Pretty Boy" Floyd and his longtime partner Adam Richetti were named as the other two, but Floyd always denied any involvement in the shooting, and there is evidence that supports his claim. The FBI, however, continues to maintain he was involved.)

Immediately after the shooting, Miller left Kansas City and fled to New York while Vi Gibson (Mathais) hid in Chicago. In October 1933, FBI agents located her apartment just one day before Miller arrived. Because no one could positively identify Miller, however, (there were no current pictures of him available) he managed to escape capture on the day he arrived. But with police, the FBI and the underworld after him, his days were numbered.

On Nov. 29, 1933, a motorist traveling outside of Detroit discovered a mutilated, naked body in the roadside ditch. Fingerprints confirmed it was Miller. It appeared the underworld got to him before the police.

News of his death was met with a mixture of emotions in South Dakota. The Evening Huronite reported that the citizens of Miller's hometown "refused to remember his reputation of a life of crime and grieved the Verne Miller, fearless sheriff and valiant soldier they knew." His wife Mildred, though legally separated since 1929, stuck by him saying, "I don't believe all the things they say about Verne. Because he became involved in a few scrapes nearly every major crime in the country was laid to him. He was wonderful to me and I have nothing against him."

His father made plans for the funeral. Miller, a veteran and American Legion member, was entitled to full military rites. However, the national American Legion forbid the Huron post from participating.

His father's hometown of White Lake, however, held the memorial service with full military rites. Miller's flag-draped casket was then escorted from White Lake to Huron by uniformed ex-servicemen, all Miller's friends. There, following a ceremony for an overflow crowd, Verne Miller was buried.

Why was the underworld hunting Miller as vehemently as the FBI?
Well, because of his participation in the Kansas City Massacre (he seems to be the only person who has positively been confirmed to have been one of the shooters) the entire criminal world was put under an intense heat by law enforcement. Organized crime knew if Miller was out of the picture, the pressure on their activities would ease up. But it also knew that if he was arrested, there was always a chance he would start naming names about a wide range of things. Therefore, word was put out that not only was no one to help Miller in any way, but he was to be killed if seen. The FBI couldn't find him, but his "friends" found him.