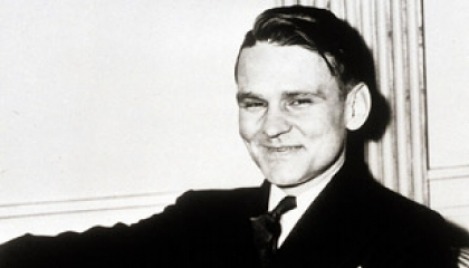 Purvis during his 'good years' 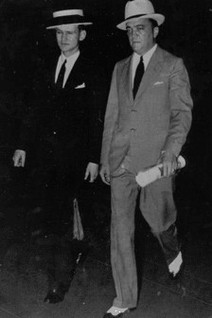 Purvis and Hoover in better days
Working on the Dillinger case back in Chicago, Purvis was eventually able to enlist the aid of Anna Sage, a brothel owner who was on the verge of being deported back to her native Romania because of her criminal activities. With a promise from Hoover not to deport her (he later deported her anyway) Sage told Purvis that Dillinger had taken up with one of her girls, Polly Hamilton, and had been staying at her establishment. Sage would go down in history as the infamous "Lady in Red." (She was actually wearing orange, but it looked red under the theater lights. Besides, it made for a better headline.)

On July 22, 1934, following a setup arranged by Sage, Purvis and his agents waited outside the Biograph Theater in Chicago until Dillinger emerged with Sage and Hamilton. They had just watched the crime film "Manhattan Melodrama" starring Myrna Loy, Clark Cable and William Powell. It was just after 9:15 p.m.

Although Purvis never fired a shot, it was his signal - he identified Dillinger to his men by lighting a cigar as Dillinger walked past arm-in-arm with Sage and Hamilton - which led to the shootout that killed Dillinger. It made Purvis an overnight hero as "The Man Who Got Dillinger." But Purvis refused to accept any direct credit, and shielded his agents from possible reprisal by describing the operation in military terms, where each man had a job to do and contributed equally. Nonetheless, Purvis was seen by the public as the hero.

Among his other credits, Purvis was also responsible for helping convict Adam Richetti, for his alleged role in the Kansas City Massacre, by serving as a key witness at Richetti’s trial; he organized the raid that led to the capture of Vern Sankey, another "Public Enemy No. 1" who faced charges of abduction; he directed the manhunt which led to the shooting death of "Baby Face" Nelson; he personally organized the manhunt for Pretty Boy Floyd, and even helped fire the fatal shots into Floyd.

Purvis was a hero in the public’s eye, but he steadfastly refused any credit for his deeds, often giving credit to Hoover for his "professional direction." Still, the public couldn’t get enough of "Little Mel" ... and none of that sat well with Hoover, who had a massive ego and wanted to be seen as the nation's top crime-buster. He wanted all the glory for what his men achieved in the field. Hoover felt Purvis was overshadowing him (and secretly felt might even replace him as director.)

Though Hoover had stood behind his favored agent after the Little Bohemia debacle, once the press tried to idolize Purvis, Hoover turned on him with a vengeance. Hoover attacked Purvis with such petty criticisms as the neatness of his office, chastised his administrative job performance, and disparaged the way he managed agents. It was reported that Hoover even went so far as to assign Purvis "bad cases" to help ensure his failure.

Purvis was simply overwhelmed by Hoover's relentless attack, and resigned from the FBI on July 10, 1935, less than a year after his victory over John Dillinger. Several agents in Chicago and elsewhere also resigned in support of Purvis (they clearly saw what Hoover had done ... and it was a pattern Hoover would repeat until the day he died with anyone he saw as a threat to him, his power, or his department).

The reaction in the press and public over Purvis resigning was confusion and outrage. Many speculated the resignations centered on agents' dissatisfaction with Hoover's leadership. Hoover, not expecting such a public backlash and seeing his own career on the line, is reported to have called Purvis, telling him that he should do what he could to stop the rumors, as they weren't good for Purvis or the bureau. In characteristic fashion, Purvis complied; refusing to speak ill of Hoover.

After his resignation, Purvis returned to the practice of law. He also agreed to be a spokesperson for several companies, an experience he found distasteful and soon ended. He signed up for military duty during World War II, serving as a lieutenant colonel. He married and had three sons, Melvin, Alston, and Christopher. (Alston went on to write and publish "Vendetta," the story of Hoover’s war on his father).

Sad ending for an 'American Hero' 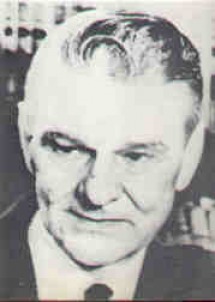 Purvis in later years
Sadly, even after he left the bureau, Purvis continued to experience the wrath of J. Edgar Hoover. There are accounts of how Hoover blocked Purvis' employment by delivering a discreet whisper to the right person, and even blocked Purvis' nomination to a federal judgeship.He also allegedly tried to thwart Purvis’ application to be special council to the Senate Judiciary Committee. Purvis got the job anyway, thanks to a senator who was a family friend ... and not afraid of Hoover.

Through all this, Purvis remained seemingly oblivious to Hoover's malice, and remained faithful to him and the FBI. He never spoke an unlike word about either.
On Feb. 29, 1960, at his home in Florence, S.C., Purvis’ life was ended with a self-inflicted gunshot wound. The .45 caliber automatic used was a gift from fellow agents when he resigned. (Legend has it that it was one of the guns that killed Dillinger, but investigation disproved that claim.)

There remains some dispute as to the exact cause of Purvis' death. The FBI stepped in and immediately ruled it a suicide, even before the autopsy and coroner's inquest were completed. However, there was no note and evidence later surfaced that Purvis might simply have been cleaning his gun, trying to remove a tracer bullet that had gotten stuck in the chamber, and the gun discharged.

Even the family doctor questioned the suicide verdict. He said Purvis was under heavy medication for a back problem and suffered from muscle control. It's entirely possible, he said, the shooting was an accident. A cornoner's inquest later ruled the gunshot was self-inflicted, but could not determine if it was an actual suicide.

Hoover refused to send a formal FBI delegation to Purvis' funeral, and never paid his condolences to the family.

One piece of evidence confirming Hoover's antagonism and its possible effect on Purvis was revealed in a telegram sent by the Purvis family to Hoover shortly after the funeral. In it, Purvis' widow wrote: "We are honored that you ignored Melvin's death. Your jealousy hurt him very much but until the end I think he loved you."