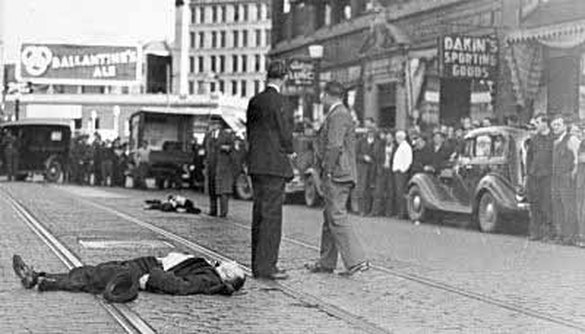 Brady's body is in the foreground. Shaffer is a short distance away. Dakin's Sportings Goods store seen at right. This photo was taken at about 8:45 a.m., just minutes after the shooting. Head FBI agent Myron Gurnea, the tall man in the black suit, surveys the Central Street carnage. The other men are FBI agents, city officials, and police officers. (Photo courtesy of Richard Shaw)

It Was Over in Seconds 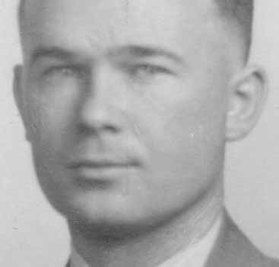 Walter Walsh in 1939.
Oct. 12, Columbus Day, dawned sunny but with a fall chill in the air and the promise of overcast skies later in the day. A holiday, the streets were already crowded with early shoppers. At approximately 8:30 a.m., agents watched a Buick with Ohio plates slowly pass the Central Street store twice before finally stopping several doors down.

As the gang parked its car, members of the Bangor Police Department, as well as Maine and Indiana state troopers, quietly began blocking off both ends of Central Street, effectively trapping the gang in a small area.

With Brady remaining in the back seat, Shaffer and Dalhover approached the store. While Shaffer remained outside, Dalhover entered.  What happened next depends on which version you read, but basically as Dulhover approached the counter, an agent put a gun in his back and told him to raise his hands. A quick search found Dalhover was armed with a .45 and a .32, along with extra clips for both.

As he was being searched, one of the agents asked, “Where are your pals?” One version has Dulhover saying nothing and an agent striking him across the forehead and bridge of his nose with a gun butt and asking, "Feel like talking now?" Another version said Dulhover did answer the initial question by saying, "They are right behind you" or "They are outside."

One thing is certain, however, despite have guns aimed at him, Dulhover attempted to run toward the rear of the store but was quickly stopped by two Bangor officers.

It was then that Shaffer apparently became aware of the commotion in the store and opened fire through the front door.

As Shaffer fired, he turned and started to run across the street but agents opened fire and he fell onto some trolley tracks in the center of the street, still holding a .32.

As that exchange was happening, two other agents with guns drawn approached Brady’s car from either side ordering him out of the car.

Brady immediately put up him hands and started to slide toward the door. “Don’t shoot, don’t shoot, I’ll get out,” he said. (One FBI agent recalled hearing Brady start to curse as he slid across the seat.)

As he opened the door, however, he drew a weapon and began firing. He was able to get out of the car, but as he attempted to run across the street several agents returned fire, one with a machine gun, and Brady, struck multiple times, fell dead across the trolley tracks. Killed instantly, he came to rest about 15 feet from Shaffer, their blood pooling together.

Shaffer survived for about eight minutes and was attended to by Dr. Harry D. McNeil, head of the city's health department. It's unknown if Shaffer, nicknamed "Loudmouth," had any final words.

One of the agents who fired on both Brady and Shaffer was Special Agent Walter Walsh, a sharpshooter who was wounded in the shoulder during the exchange. He was treated and released from a local hospital. (Walsh lived to 106 and passed away in 2014. He was one of the agents who arrested Arthur “Doc” Barker outside his apartment block in Chicago in 1935. Placing a .45 to Barker's head, Walsh said, "Don’t move, Doc, or I’ll kill you. Where’s your heater, Doc?” Barker chuckled and said, "It's in the apartment and ain't that a place for it?" Walsh was also the agent who found "Baby Face" Nelson's body after it was left in a cemetery.)

Brady was holding a .38 in his hand from which four shots had been fired. He also had a .32 and a .45 in his pockets. Ironically, the .38 he was holding was the gun taken from the body of murdered Indiana State Trooper Paul Minneman. Also in Brady’s pocket was a photo of an unidentified young woman, possibly of someone he was seeing. Brady and Shaffer had about $8,000 in their pockets; Dulhover had about $2,000. Brady also had hand-drawn maps of banks.

The bodies were removed about 9:30 a.m. by the White & Hayes Funeral Home of Bangor.

It took the FBI one day shy of a year to track down the gang once it had entered the hunt.

As crowds gathered on the street outside, Dalhover was taken out the back of the sporting goods store to the Bangor police station where he was questioned extensively by the FBI and others. He was held over night and in the morning was given his first meal in 24 hours; bacon, eggs. toast and coffee, following by more questions. Lunch was coffee and sandwiches, followed by more questions.

He spoke freely to the FBI, detailing a large number of crimes. He did say one chilling thing, however. He said he come to Maine fully intent on killing anyone who got in his way.

He eventually was taken  to Indiana and convicted in federal court for the murder of Minneman and was sentenced to death. He died in the electric chair at the Indiana State Penitentiary, Michigan City, on Nov. 18, 1938. He was buried in what was then North Madison.

Shaffer’s body was claimed by his father and returned to Indiana and he was buried in Indianapolis by the Shirley Funeral Home. His casket was black with gold handles and an off-white satin lining. He was wearing a new dark blue suit.

With only a distant uncle who refused the body, Brady went unclaimed. He was buried at county expense wearing a cheap suit and placed in a plain pine box in an unmarked grave in Bangor’s  Mt. Hope Cemetery. A grave marker was finally placed in 2012. He was buried on a cold, overcast day.  The undertaker, grave digger and a few assorted officials were the only ones present.

Weapons recovered from the gang after the shootout included nine .45s; seven .38s; three 30-caliber machine guns with numerous 350 shot belts, 22 of which were mounted for use in an automobile; seven .32s; five .30 caliber rifles; a .30 caliber rifle; and two 12-gauge shotguns. Also recovered more than 2,000 rounds of ammunition, extra clips, machine gun drums, and tear gas grenades. Dalhover said the gang once considered raiding an Ohio police department which had several submachine guns but abandoned the plan. They had even discussed raiding the FBI building in Washington to steal weapons.

Photographs of the bullet-ridden bodies of Shaffer and Brady lying in the middle of Central Street became iconic local images, and long hung behind the counter at Dakin's. In the photographs, large crowds of onlookers are gathered on the sidewalks.

The Buick Roadmaster the gang was driving was later purchased by Maine insurance agent G. Allan Wentworth, who drove it around as a novelty until 1938, when he sold it. There’s no record of the vehicle after that.

Although Hoover claimed there was no media leaks, Bangor Daily News and Bangor Daily Commercial must have been tipped because Bud Leavitt, editor John O’Connell and photographer Dan Maher said they spent the night in their cars on Central Street. It’s likely someone from Dakin’s tipped them.

Finally, Brady’s brain was removed, likely for research purposes, and it was autopsied at the former Eastern Maine General Hospital, now Eastern Maine Medical Center. What happened to it is unknown, but it was not buried with Brady. 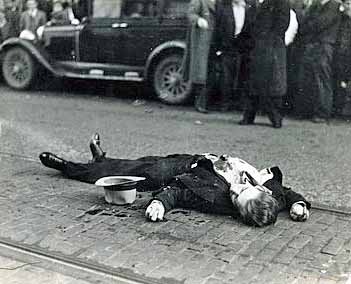 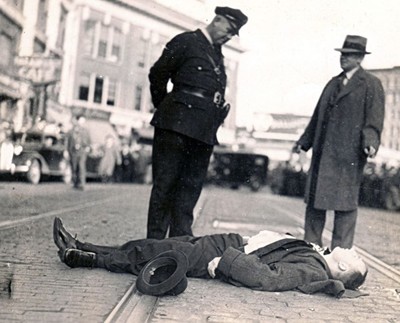 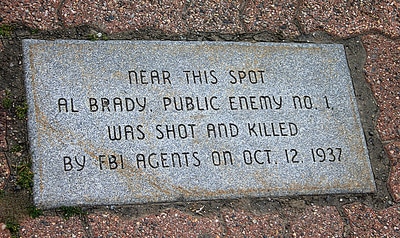 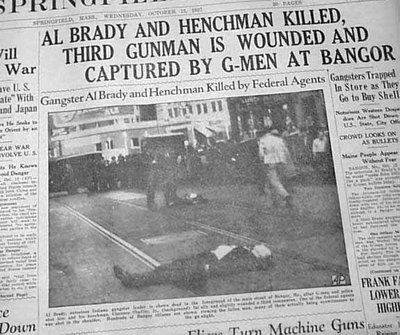 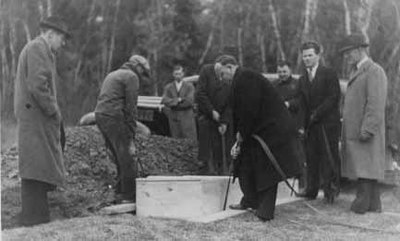 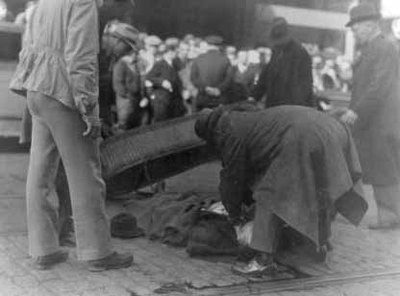 In the top photos are the bodies of Shaffer, 21, left, and Brady, 25. The plaque in the center was placed on Central Street in Bangor, Maine, to note the events of 1937. To its right is the Bangor's Daily News' front page. Above left is the buried of Brady, while at right, a funeral director removes Brady's body from the street.