The FBI goes calling in Florida 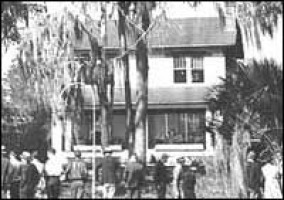 The house at Lake Weir.
During 1931-1933, the gang successfully looted banks at such a rapid pace, it became almost routine, according to Karpis, in his autobiography. As with most gangs of the era, they operated mostly in the Midwest, and constantly moved between St. Paul, Chicago, Toledo, and Cleveland. Secondary cities were Reno, Kansas City, Hot Springs and Tulsa and, as the heat intensified in 1934, Florida, New Orleans, and east Texas.

In 1933, at the suggestion of St. Paul gangsters Jack Peifer and Harry Sawyer, the gang moved into the more lucrative field of kidnapping. They committed two kidnappings for ransom within six months. In June they snatched William Hamm (of Hamm’s Beer), and in January of 1934, they kidnapped Edward Bremer, a banker. Hamm’s ransom was $100,000 and Bremer’s $200,000. Both ransoms were paid, and both victims were released unharmed.

Bremer, however, may not have been the best choice of victims, and that kidnapping would hasten the end of the Golden Age of Bank Robbery. The victim’s father, Edward Bremer Sr., was a close friend and big political donor to President Franklin Roosevelt, who mentioned the kidnapping in one of his radio fireside chats. The Lindbergh kidnapping in 1932 was still in the news and another high profile kidnapping, that of Oklahoma oilman Charles Urschel by Georege "Machine Gun" Kelly in 1933, coupled with the still ongoing investigation into the Kansas City Massacre, forced the FBI and local police departments to greatly step up their pursuit of the various gangs.

With most of the big names now out of the way, the FBI turned its full attention to the Barker-Karpis gang, the last of the high profile outlaws, and it didn’t take long to get initial results.
In the early evening hours of Jan. 8, 1935, as Doc Barker and his girl friend left his apartment near Lake Michigan in Chicago, he was surrounded by FBI agents. Agents searched Barker and, surprising, found he was unarmed. When asked where his gun was, Barker chuckled and replied, "Home, and ain’t that a hell of a place for it?"

Barker was tried and found guilty for the Bremer kidnapping, in part based on his fingerprints found on a gasoline can along the Bremer kidnap route. He was sent to Alcatraz for life, and died in 1939 from wounds received in an escape attempt. His last words were, "Look at me. I’m all shot to hell here."

When the FBI searched Barker’s apartment after his arrest, they found a map of Florida, with the Ocala region circled. The FBI had an informant named Monty (Byron) Bolton who was a minor participant in the gang’s Hamm kidnapping, and he was able to provide information about Fred Barker and his mother, who were staying in a cottage on Lake Weir in Florida. The address was 13250 Highway 27A in Ocklawaha.

According to one FBI account, Special Agent E. J. Connelley (part of the "Flying Squad" and who also functioned as an assistant director of the FBI) actually went up to the house and knocked on the door. When Ma Barker answered, he told her that the FBI was there to arrest Fred, who promptly began firing a machine gun from an upstairs window. Connelley escaped unharmed.

That incident is certainly debatable, but what is certain is that a gun battle followed that last for several hours. When it was over, both Barker and his mother were dead. 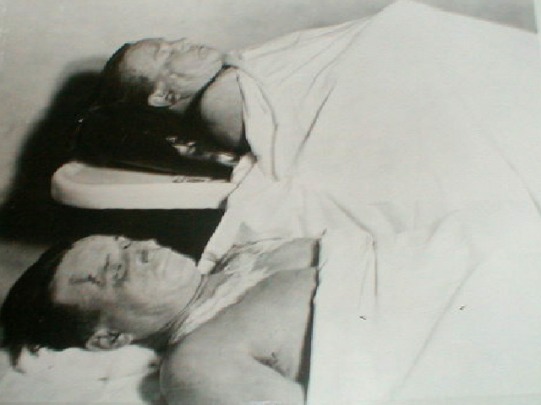 Fred Barker, left, and Arizona Kate Barker on the slab in a Florida funeral home shortly after thir deaths. 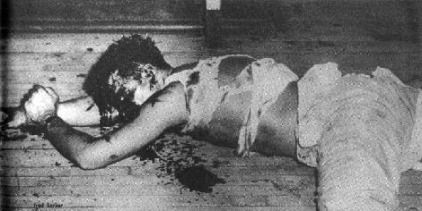 Fred, dead in the Florida cottage